Application of Quaternary-Ammonium Compounds on Medical Devices: Moving from Lab to Market

Previous collaborations between Zorg Innovaties Nederland B.V., and Rijksuniversiteit Groningen resulted in proof of concept of stability and anti-bacterial properties of Quaternary-Ammonium Compounds (Quats) applied to PBMS (silicone rubber). The hhint kickstarter project is initiated to extend the ongoing PPP with a Spanish industry partner LVD-Biotech, to jointly investigate safety and effectiveness of industrially applied Immobilised Quats on medical indwelling devices that are partly inside and partly outside the body.

Healthcare associated infections due to biofilm formation are a major concern when using medical implants and indwelling devices. For example, the incidence of catheter related urinary tract infections is 10-20%, which leads to complications, extended hospital stay and even mortality. Other examples include ventilator associated pneumonia and vascular catheters  that are in place for extended periods of time. The growth of biofilms are reported to be associated with increased resistance to antimicrobial therapies.

Immobilised Quats are ideal candidates to combat bacterial growth on medical devices because:

This project will elucidate whether Quats can be applied cost-effectively to three medical relevant materials: 1) PBMS used for temporary indwelling medical devices, 2) titanium orthopaedic external fixation devices and 3) PVC, one of the most used material for disposable catheters. Evaluation of the antibacterial properties and preclinical toxicology assays will result in go/no-go decision for entering the final clinical test phase.

In this research project an academic project is transformed into a commercial feasible project by searching for the most simple procedure for the preparation of a contact killing antibacterial coating on titanium. The overall coating process was reduced from nearly a week to less than one day, substantially increasing commercial viability. Coating time has a direct impact on production cost and inventory cost. Several steps as described here were unexpectedly successful, as, according to the literature, it would be a dead-end road. 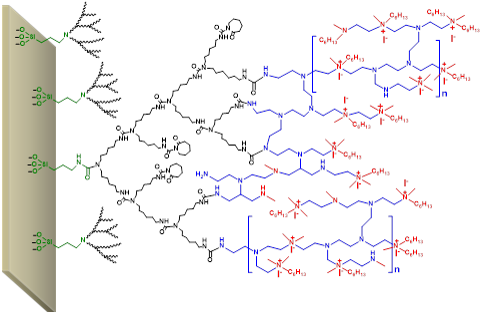 Image: A surface provided with an antibacterial hyperbranched polyurea coating