PharmAMPs: Pharmaceutical development of antimicrobial peptides for the prevention and treatment of infections against (multi)-drug resistant bacteria.

Antimicrobial peptides (AMPs) are inspired by naturally occurring antimicrobial proteins and peptides, that are produced by all living organisms and can combat bacterial infections, including resistant infections. AMPs are typically small, cationic peptides (“sticky peptides”) that exhibit a broad range of antimicrobial activities, and often also possess immunomodulatory properties. Moreover, intrinsically, they are also more robust towards resistance development than traditional antibiotics. In the recent O’Niell report on solutions to fight AMR, AMPs and their derivatives are ranked amongst the most promising alternatives to traditional antibiotics

The concept of using AMPs for therapeutic purposes has been around for some time. Unfortunately, the 1st generation AMPs had limitations that prevented further development, especially with regard to their (limited) potency and high cost of goods, resulting in poor commercial perspectives. Several peptides have been tested in clinical studies against a range of topical infections, but their development was halted for these reasons.

A new public private partnership was formed between the Leiden University Medical Centre (LUMC) and Madam Therapeutics with the intent to work on 2nd generation peptides with improved characteristics. Madam Therapeutics, is a near clinical stage biotech company that is developing a new generation of AMPs specifically to combat resistant bacterial infections and to prevent and treat infections that are currently left untreated due to the risk of resistance development with current antibiotics. The new peptides are based on technology from LUMC with whom Madam Therapeutics has been working closely over the recent years to develop the most optimal peptides, which we are now converting into powerful antibacterial products. 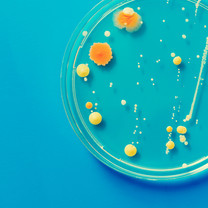 Within this PPP, we have established that the lead peptide (SAAP-148) indeed has significant advantages over traditional antibiotics. SAAP-148 was found to be a very effective, broad-spectrum anti-microbial peptide which possesses very rapid bactericidal activity. SAAP-148 has shown in this project to be very effective against bacteria residing in biofilms whereas traditional antibiotics are not. SAAP-148 is also very effective in the killing of (multi-) resistant bacteria and is very robust against resistance formation itself. Finally, we established that SAAP-148 has also shown significantly more potency than 1st generation AMPs in in-vitro comparison studies; in fact we demonstrated that SAAP-148 is one of the first in its class to be active at a sub-micromolar range.

As a follow-up to this project, Madam Therapeutics and LUMC are now preparing the first clinical proof of concept studies with the lead product SAAP-148 formulated as a gel for topical treatment of bacterial infections in chronic wounds, burns and in a nose gel to treat nasal MRSA carriers. In addition, we are also investing possible novel PPPs for collaborative (academic) research efforts and continuous pre-clinical development of other AMP-based products for other indications and other formulations.

Summary
The positively charged (hence “sticky”) antimicrobial peptides (AMPs) have a very different mechanism of disturbing bacterial activity. They a high specificity towards bacteria but a low specificity across bacterial species. AMPs are excellent candidate agents that subvert a number of Anti-Microbial Resistance (AMR) mechanisms, and thus are attractive agents to prevent and overcome AMR. A new PPP was formed between LUMC and Madam Therapeutics to prepare for the first clinical proof of concept studies with our “sticky peptides”.
Technology Readiness Level (TRL)
4 - 9
Time period
20 months
Partners