On 15 November, a Letter of Commitment was signed in Utrecht by the partners of RegMed XB, an initiative in regenerative medicine. These partners – health foundations, national and regional authorities from Flanders and the Netherlands, research institutes, medical centers and Top Sector Life Sciences & Health – confirm their (financial) commitment in a plan to develop affordable therapies for four chronic diseases. This plan is the foundation of the RegMed XB program that aims to accelerate scientific and medical breakthroughs to create new treatments for hundreds of millions of people worldwide. It concerns more than 250 million euros over 10 years to ultimately cure people with heart disease, kidney failure, type 1 diabetes and osteoarthritis. The document establishes a financial foundation for the translation of excellent research into a large-scale industrial production of treatments for chronic diseases.

The collaborating research groups in Utrecht, Leiden, Leuven, TU Eindhoven and Maastricht are among the world's best. RegMed XB offers them a unique structure in which doctors, scientists, health foundations and entrepreneurs work together on well-defined research goals to cure chronic diseases: Moonshots. RegMed XB also cooperates with the prestigious Gravitation program 'Materials Driven Regeneration', which has a budget of 25 million Euros. With the extra resources and the discipline of RegMed XB, the program builds on the good results the research groups have already achieved. A key point in the document is that the research is explicitly patient-oriented. The participating health foundations: the Dutch Kidney Foundation, the Dutch Heart Foundation, the Dutch Diabetes Research Fund, the DON Foundation and the Dutch Arthritis Foundation therefore have a pivotal role in RegMed XB.

In order to make the transition to the patient, a substantial program has been set up to stimulate entrepreneurship. A team of experts guides the steps from a scientific breakthrough to the design and manufacturing of medical treatments for the patient, including training in entrepreneurship, patent financing, and testing new treatments.

The current valorisation mechanisms ('marketing') of the participating universities are strengthened through thematic cooperation and an extra boost. There is a budget for public private partnerships (PPPs) between universities and industry with project loans to companies. Start-ups that arise directly from the research are stimulated with 'seed capital'. Because RegMed XB aims for a new production platform for regenerative medicine, there is also a budget for 'infrastructure and exploitation' for research and development and the gradual scaling-up to the large quantities needed to treat many patients worldwide in a commercial and sustainable model.

The research program further strengthens existing regional priorities and ensures closer cooperation between the participating regions in the Netherlands and Flanders. In addition, both countries clearly expressed the intention to invest in RegMed XB in a MoU signed November 5 this year in Middelburg. Read the article on the MoU here. 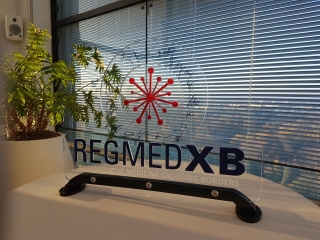