Further scale testing for SARS-CoV-2 is of critical importance in order to allow more freedom in society for interaction, while maintaining control over the infection and safeguarding health in society. This is of utmost importance for all individuals that have contacts with vulnerable members in society.

Large-scale testing for SARS-CoV-2 is challenged by a multitude of factors, including shortages in reagents and consumables. Furthermore, our infrastructure for medical diagnostic testing has been established to optimised to perform multiple, symptom-based diagnostic tests for the benefit of a single patient and not to offer a single test for large groups of individuals.

This proposal aims at developing a simple and fast method for sampling, pre-processing and detecting of SARS-CoV-2, aiming at efficient and large-scale testing in society. The proposal has four critical components. A cellulose-based material for integrated virus collection (dry swab) will be devloped, lysis and RNA capturing (1). The method for capturing virus material will be linked to two methods for detection, one based on an isothermal amplification and detection assay (LAMP), enabling rapid, sensitive near patient detection of SARS-CoV-2 (2). The second method for detection is based on a novel ultrafast endpoint PCR (3). Based on cellulose based virus capturing and extraction, and the isothermal detection assay, the aim is to develop a Point-of-Care testing platform, allowing molecular tests to be performed outside of a laboratory infrastructure (4).

By alleviating the main bottlenecks in the current detection: efficiency of viral RNA extraction, speed-of-detection, simplification of technological requirements for testing and near patient diagnostics,  the means to for large-scale testing will be provided. 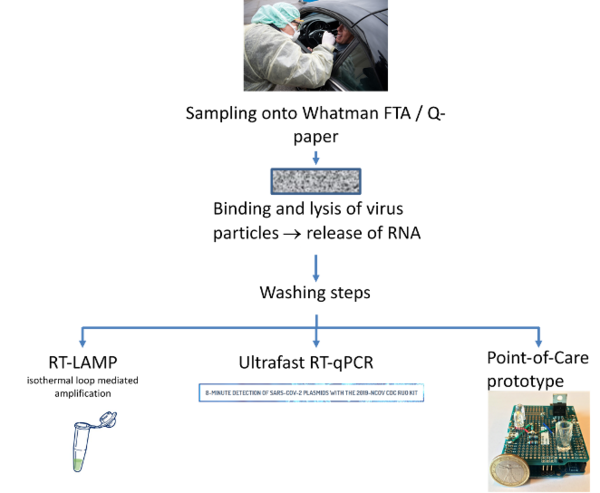