Since Monday 17 June, the Netherlands has, for the first time in its history, a Minister of Disability Issues. Rick Brink won this appointment during the broadcast of the television programme ‘De minister van Gehandicaptenzaken’ (The Minister of Disability Issues) on NPO1. Brink was elected by a jury, including former cyclist Leontien van Moorsel, cabaret artist Vincent Bijlo and former Minister Ronald Plasterk, from six candidates.

In this new position, he can remove obstacles for the 1.8 million Dutch people with a disability. Brink wants to particularly focus on helping children fully integrate into education and society. It is not an official ministerial post: Brink will be employed by broadcaster KRO-NCRV, where he and his team will be given a year-long o put relevant topics on the political and media agendas.

Rick Brink works in daily life as a project leader in corporate service. He also has several years of political experience as a councillor in the municipality of Hardenberg. In his new position, Brink will work independently from politicians, advocates and patient associations. He will, however, regularly talk with these parties and be advised by them. However, the interests of all people with disabilities will always be at the top of his mind. 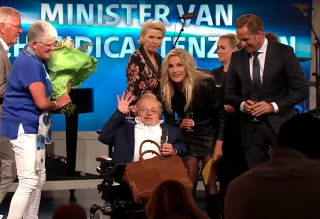